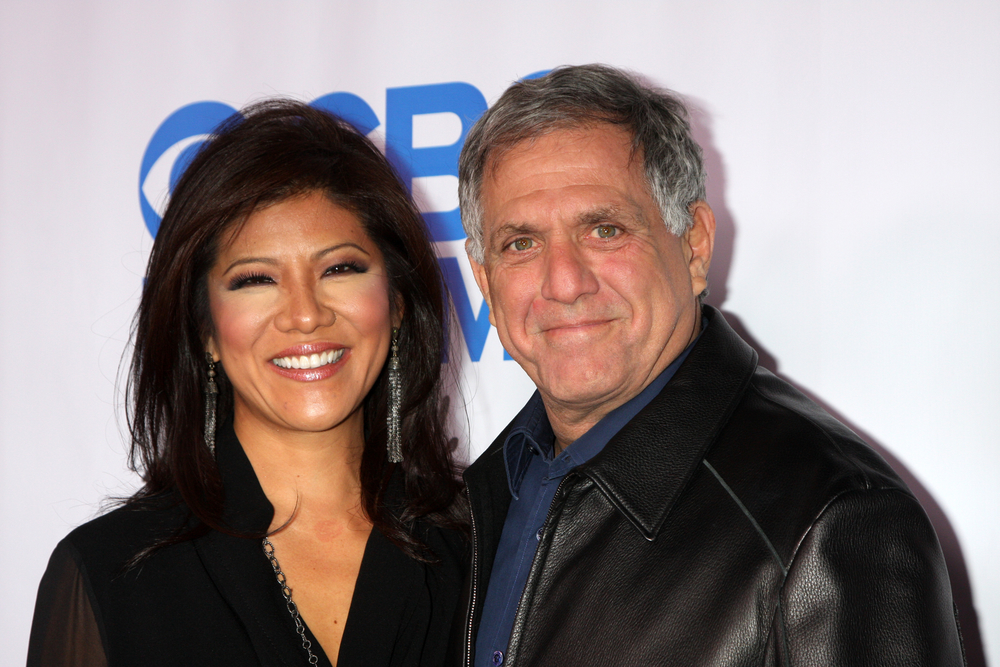 UPDATE: November 30 2018: Actress Bobbie Phillips has alleged that in 1995 Les Moonves sexually assaulted her. The details are downright despicable. Newish to Hollywood, Phillips’ manager had set up a meeting for her with Moonves. In the meeting,  Moonves allegedly unzipped his pants, pulled out his penis, pushed Phillips to her knees and forced his penis into her mouth. She reported the incident to her manager who bot only did not do anything to help but rather appeared to have used the information to improve his own standing in Hollywood. Moonves’ $120 million severance package is now at great risk– as well it should.

UPDATE: September 9 2018: Les Moonves “resigned” from CBS and the Network says it will donate $20 million to an organization that supports #metoo.  Moonves made a statement continuing to deny all claims and reminding everyone that they are decades old.

We love Ronan Farrow. Can we just say that at the outset? His investigative work and commitment to exposing sexual harassment in Hollywood is deserving of recognition and praise.

So, what did he uncover this time? (In case you forgot, Farrow, son of Mia Farrow and Woody Allen, is the reporter who blew the lid off Weinstein). Well, this time, it’s all about CBS chairman and CEO Les Moonves. In an article published in The New Yorker, Farrow talked with 6 women who accuse Moonves of harassment and intimidation and speak of a culture of sexual misconduct at CBS since the late 1980s to late 2000s.  Moonves has been a powerful media executive for more than twenty years and is one of the highest-paid corporate execs in the world so, this is a VERY big deal. But, what makes these allegations all the more disturbing is that Moonves has been very outspoken (“supportive”) of #metoo movement. In fact, he was a member of the Commission on Eliminating Sexual Harassment and Advancing Equality in the Workplace which is led by Anita Hill (for those who don’t know about Anita Hill–she is the lawyer and colleague of Supreme Court Clarence Thomas, who, at Thomas’ confirmation hearing spoke out about his sexual misconduct toward her. Though it was a big story back in 1991 you see who won that.)

What are these women alleging Moonves did? Four of the six women said Moonves forcibly touched or kissed them during business meetings. They even called it a “practiced routine.” The other two women said that the executive intimidated them physically and threatened their careers.

Moonves admits he may have been inappropriate at times, but that he always understood that ‘no’ meant ‘no.’  In a statement he said, “I recognize that there were times decades ago when I may have made some women uncomfortable by making advances. Those were mistakes, and I regret them immensely. But I always understood and respected—and abided by the principle—that ‘no’ means ‘no,’ and I have never misused my position to harm or hinder anyone’s career.”

Hmm. Really Les? That doesn’t seem to be the case. Moonves is powerful, and like those who have such power, he understands it–it is well known in Hollywood that he is someone who can make or break a career. We at PROOF are huge fans of Emmy award winning actress and writer, Illeana Douglas, one of his accusers, so when we learned of what she experienced with the all-powerful Moonves, we were almost at a loss for words. She said that “the physicality of [her experience] was horrendous.” and that she was soon fired from the station and told that she would “never work at this network again.” Douglas even told director Martin Scorcese (whom she dated for several years) about her experience; and he urged her to “be cautious” about legal action because of how powerful Moonves was in the industry. Yup. You read that right, ridiculously talented and accomplished director Martin Scorcese told his girlfriend to be not make waves. Ultimately, Douglas “lightly complained” and CBS gave her $125,000 and $250,000 to appear in a new mini-series. She never worked for CBS again.

Or, how about writer Janet Jones? She alleges that Moonves “threw himself on top of her” while trying to kiss her in 1985. Jones told a producer who then confronted Moonves. Moonves once again retaliated with fear allegedly telling Jones, “I’m warning you. I will ruin your career.”  This stuff really happens! This is not a Scorcese mob film.

When writer Julie Kirgo rebuffed Moonves’ request for a date, she was labeled as “difficult to work with.”

Many are now saying that Moonves enjoyed having the power to crush women should they refuse to bend to his whim and that attitude permeated the culture at CBS. Farrow writes that 30 current and former CBS employees talk about being discriminated against and harrassed while on the job, but the male staffers who were accused were never punished. In fact, they were often promoted. Feel as if you’ve heard this story before?

While these women continue to come forward to end the cycle of abuse that starts at the very top of the CBS executive board, the company insists that during his last 24 years with the company, there have been no misconduct claims and no settlement against Moonves.

The 68-year-old is now being investigated by CBS, though the company insists that they “do not believe that the picture of their company created in The New Yorker represents a larger organization that does its best to treat tens of thousands of employees with dignity and respect.”

As for his wife, tv host, Julie Chen, she’s standing by her man. In a statement made on Twitter, Chen wrote, “I have known my husband, Leslie Moonves, since the late ’90s, and I have been married to him for almost 14 years. Leslie is a good man and a loving father, devoted husband and inspiring corporate leader. He has always been a kind, decent and moral human being. I fully support my husband and stand behind him and his statement.”

While Moonves has been suspended from the Board of USC’s renowned School of Cinematic Arts, the Board at CBS has not taken any action against him other than hiring two law firms to investigate the allegations made about him, CBS News and CBS in general.

And, the truth is, the statute of limitations has long run on the claims against him so unless more recent ones are unearthed Moonves will not face any legal consequences. Are we the only ones who are disappointed in CBS’ decision to keep Moonves at the helm? At least a suspension, a little leave of absence until the “investigation” is complete? CBS, come on.