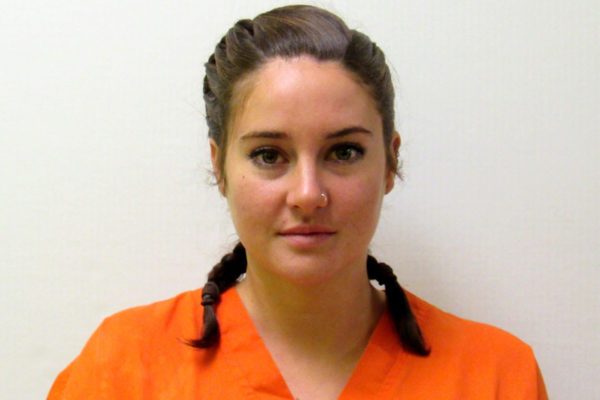 From Shailene Woodley to Justin Bieber: The Best of Celebrity Mug Shots

From bar bust ups to drunk driving to “unintentional” trespassing and more, celebrities are no strangers to arrests. And of course with an arrest comes the dreaded celebrity mug shot, which is sure to be plastered across the Internet even before the celeb has called his lawyer!

Celebrity mug shots might just be our favorite form of selfie– well, it’s not really as selfie but we sure do like looking at them (Must be because without make up, the right lighting, a professional photographer and some retouching most celebs look a lot more like we do than we thought!). 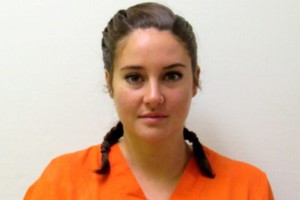 So, how’d she get to be part of the celebrity mug shot walk of fame? On October 10, 2016, Woodley and 27 other people were arrested during a protest at Standing Rock, while attempting to block the Dakota Access pipeline. Live footage of the actress’ arrest was streamed to roughly 40,000 viewers via her Facebook page. Later, she was strip searched in jail. I know, it seems weird to strip search someone following this type of offense and though kinda gross one can likely conclude that it might be related to her celebrity status (imagine those bragging rights?!) but despite Woodley also being “just shocked” by the strip search, apparently is is common practice in that jurisdiction for low level crimes.  Standing Rock Sioux Tribal Chair Dave Archambault II and others have also been strip-searched after being arrested for nonviolent civil disobedience against the pipeline.

After the arrest and resulting strip search, the environmental activist said: “Every time we allow another pipeline … we are endorsing the fossil fuel industry and only prolonging the time it is going to take to switch to renewable energy.”

We at PROOF aren’t fans of breaking the law but Woodley’s cause was a noble and good one.  We commend her for her bravery and standing up for what she believes in–no matter the consequences.  Keep fighting the good fight, Shailene! 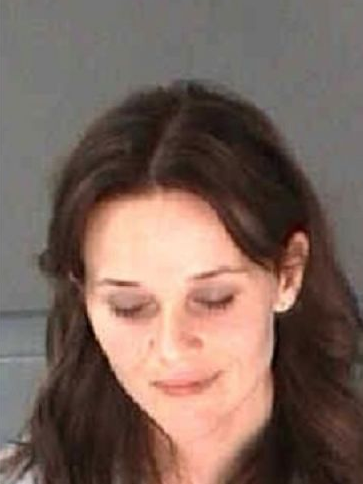 The “Big Little Lies” actress and her husband, Jim Toth, were arrested in Atlanta in 2013. Toth was pulled over for suspicion of driving while intoxicated in Atlanta. Apparently Reese didn’t like that so much. So much so that she got into an argument with the police officer, which led to her arrest.

This celebrity mug shot is pretty unusual because it’s a pretty unusual mug shot for anyone — Witherspoon is looking down! The whole point of mug shots are for identification purposes. We have to wonder if the Atlanta PD gave the superstar a pass on looking at the camera because of her A-list status.

Either way, shortly after her jail release, the actress issued a statement saying there was “no excuse” for her behavior.

“I was disrespectful to the officer who was just doing his job. The words I used that night definitely do not reflect who I am. I have nothing but respect for the police and I am very sorry for my behavior.” 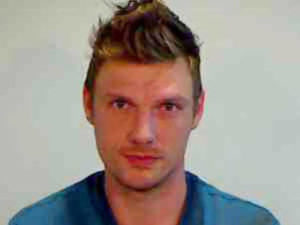 Backstreet Boy Nick Carter may not have wanted it that way (sorry, sometimes we just can’t help ourselves with these puns!!) when he was arrested in Florida on January 13, 2016. The boybander was booked by the Monroe County Sheriff’s Office on a misdemeanor battery charge following an incident outside Hog’s Breath Saloon in Key West.

The singer was released after pleading not guilty and posting $1,500 bail. He was ordered to stay away from the bar.

Unfortunately for Carter, an employee at the Hog’s Breath, Skylar Carden, 21, filed a civil lawsuit against Carter a few weeks later, in which he accused the singer and former “Dancing with the Stars” runner-up of battery.

In a statement accompanying the lawsuit, Carter’s lawyer, Mark DiCowden’s said, “Nick Carter has shown the world that he is nothing more than a backstreet thug.” And you thought our pun was bad? Nick Carter,a thug? And what’s a backstreet thug?? All we picture is a good looking boy band member singing romantic songs. That’s not so scary! But the lawsuit did contain some scary allegations including that the singer “violently attacked” Carden by “striking and choking” him.

Carter settled the matter out of court–the terms of the settlement are not public–and the case was dismissed with prejudice (remember this means Carden can’t bring the suit again for any reason). 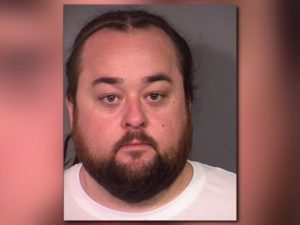 Austin “Chumlee” Russell, star of the History Channel’s “Pawn Stars” was arrested in Las Vegas on March 10, 2016 and charged with drug possession and “prohibited person in possession of a firearm,” according to the Las Vegas Metro Police Department.

Here’s the really crazy part of this story: officers were serving a warrant at the reality star’s house for a sexual assault case when they found Russell with at least one gun, as well as with methamphetamine and marijuana.

In May 2016, Russell pleaded guilty in Las Vegas court to attempted possession of a controlled substance. As a result of the deal, Russell did not have to go to jail for the misdemeanor charge, instead he was sentenced to three years’ probation. The felony count of ownership or possession of a firearm by a prohibited person was stayed. If Russell completes the terms of his probation, the gun charge will be dismissed. And, that sexual assault charge that started the whole thing? Police have confirmed that Russell has not been charged at the time for that. 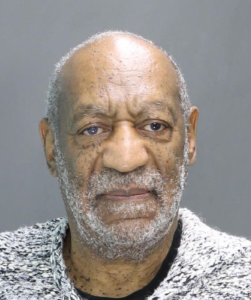 We know we talk about Bill Cosby a lot on PROOF but we can’t help it, there are just so many aspects of his wrongdoing that make for excellent legal lessons!  And so, Bill Cosby’s infamous celebrity mug shot, which was years in the making after dozens upon dozens of accusations. As PROOF readers know, there is only one criminal case going forward against the disgraced funny man. He has been free on $1 million bail, but faces up to 10 years in jail for each of the sexual assault counts he is facing.

The Montgomery County District Attorney’s office in Pennsylvania, where he is set to stand trial, released this mugshot shortly after his arraignment. Those do not look like the same kindly eyes of Dr. Huxtable. Unbelievable downfall. 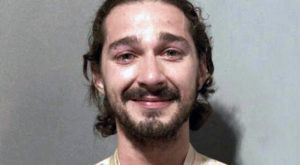 Shia Labeouf has been arrested more than once but of course his most famous celebrity mug shot was after getting drunk at Broadway musical “Cabaret” in New York City. In this shot, Labeouf has a big smile on his face and looks like he’s been crying. It’s unnerving to say the least!

According to police, the “Transformers” star was smoking inside the Studio 54 theater and acting “loud and disruptive” during the first act of the musical. Law enforcement officials were notified. The “Transformers” actor was arrested during intermission, handcuffed, and escorted out of the theater.

He was then charged with two counts of disorderly conduct and one count of criminal trespassing before being released.

Shia has since been arrested again in connection with his HeWillNotDivide.US protest but was also quickly released. For more information on that, click here. 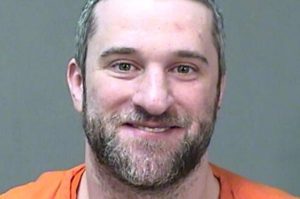 We all loved super nerd Screech on Saved by the Bell, too bad that geeky kid turned out to be such a not-so-great adult. Dustin Diamond gave off some seriously dangerous vibes when he made his way into the celebrity mug shots wall of fame after he was arrested in Wisconsin for allegedly stabbing a man with a switchblade on Christmas Day 2014.

The former teen actor was charged with possession of a switchblade, reckless endangerment and carrying a concealed weapon.

He was later convicted of carrying a concealed weapon and disorderly conduct, both misdemeanors. He served nearly three months in jail. 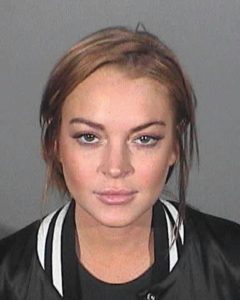 We love this one of Lindsay Lohan’s celebrity mug shots because she’s just so over it. She’s like — been there, done that!

This is the redhead’s mugshot from March 19, 2013 when she turned herself into the Santa Monica police. She eventually pleaded no contest to reckless driving and providing false information to the police who were investigating an accident that happened the previous summer.

The troubled star was sentenced to 90 days in a lockdown rehab facility.  Want more information about Lohan and the criminal justice system, click here and here. 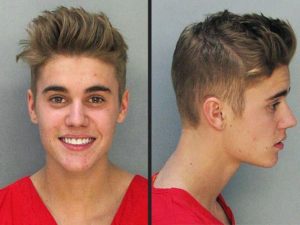 Oh, Justin! We love you but you make it so hard on us sometimes.  What do we at PROOF have to say about our favorite bad boy’s celebrity mug shot? Well, does is not look like Bieber is having the best day of his life? Does to us! In reality though he has just been arrested for a DUI and drag-racing in Miami in 2014. Must have been a really fun race!

On the serious side though, at a press conference, a spokesperson for Miami Beach Police said that the arresting officer “smelled odor of alcoholic beverage” on the singer. Bieber was also charged with driving with an expired license and resisting arrest without violence.

We at PROOF are crossing our fingers and hoping that there are no celebrity mug shots of Bieber–even if they do look as good as this one!