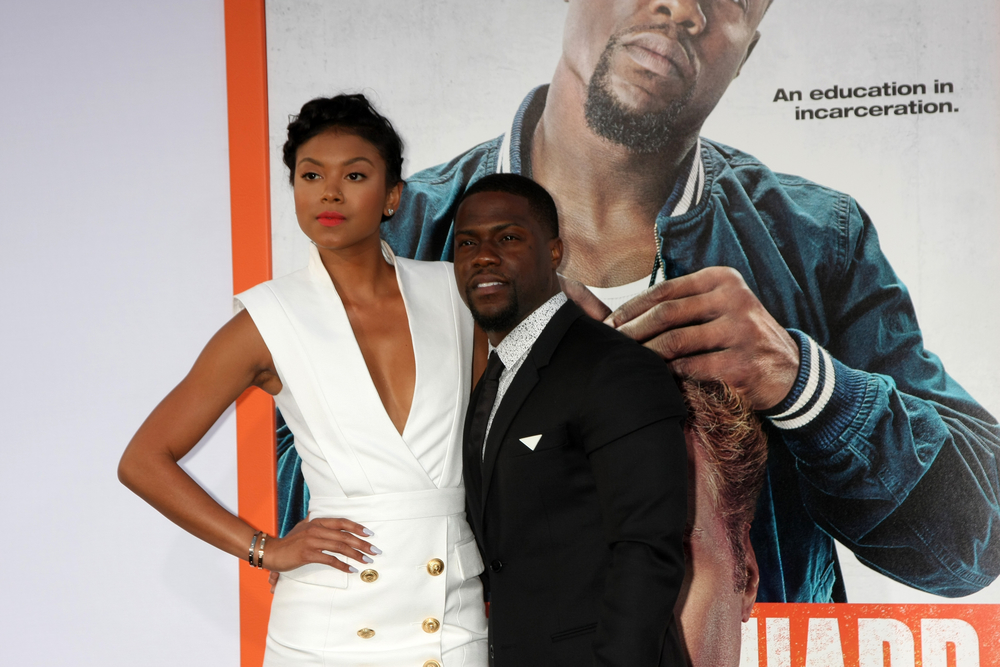 The Kevin Hart Extortion Case: Here’s Everything You Need to Know

And, FYI, it’s not the first time Hart has had to deal with the optics of being a cheater.

After a summer full of infidelity rumors and ex-wife drama (more on that in a bit), it looks like September won’t be the month that Kevin Hart escapes the rumor mill, which is—and will continue to be—churning at full speed. Here’s why: The comedian is in the middle of an extortion case that involves a compromising video and a whole lot of drama.

Let’s start at the beginning. Late on September 17th, Hart posted a video on his Instagram captioned, “Sending so many apologies to my wife & kids. I gotta do better and I will. I’m not perfect and have never claimed to be…I love you all.” The accompanying video included Hart admitting that he “made a bad error in judgment and put myself in an environment where only bad things can happen, and they did.” He goes on to say that he has apologized to his wife of one year, Eniko Parrish, as well as to his children. “At the end of the day, man, I simply got to do better, but I’m also not going to allow a person to have financial gain over my mistakes,” Hart said, alluding to the extortion. “In this particular situation, that’s what was attempted, and I said I’d rather fess up to my mistakes.”

Shortly after, People Magazine released a statement from one of Hart’s representatives explaining, “Someone tried to set Kevin up in a failed extortion attempt. As law enforcement is involved, we cannot comment further as it could affect the investigation.” We lawyers often encourage “taking the sting” out of something before it is exposed (Generally this is done when we put a witness on the stand who might have something unsavory in his/her background that we know the other side is going to address.  Instead of letting the opposing party shape the narrative, the attorney who called the witness brings the information out first on direct exam). It would seem Hart’s cryptic Instagram video was perhaps his way of doing that and getting ahead of the issue.

A report surfaced asserting that the extortion attempt was allegedly made by someone who has a video of Hart that shows Hart and a woman engaged in “sexually suggestive” behavior. By now most of us that the woman in the video is not his wife, Eniko. Hmm….

Initially, reports indicated that there was no way of knowing if the person demanding millions of dollars from the comedian was the woman shown in the video or a third party. As details continue to surface, the woman shown at the start of the video has immediately requested a lawyer, and is insisting that she knew nothing about the video. On September 18th, there were reports that her lawyer contacted Kevin Hart’s people and said that his client would take a lie detector test to prove it…but only if she is paid $420,000.  Extortion?

On September 20th, 2017, the woman in question, who has been identified as Montia Sabbag, held a press conference with her lawyer, Lisa Bloom (who as some may know represents several plaintiffs involved in the Usher Hepes lawsuit, represented Blac Chyna in her revenge porn “situation” with Rob Kardashian as well as representing Mischa Barton in her revenge porn case against a former boyfriend). While she acknowledged that she had “an intimate relationship” with Hart, she asserts, “I am not an extortionist. I’m not a stripper. I’m a recording artist and an actress, and I have not broken any laws. I had nothing to do with these recordings.” Lisa Bloom has clarified that Sabbag is not demanding money from Hart (that’s good legal advice because being charged with extortion is not going to help Sabbag’s career)), but did not address the previous request for cash in exchange for a lie detector test. Bloom also wants us to understand that Sabbag is a victim, too. Recording Sabbag and Hart being intimate without either of their consent is not only a huge invasion of privacy, it is also illegal. While it is easy to think of Hart as the victim because he has been extorted for money, it is important to remember that Sabbag has been thrust into the spotlight as party to his infidelity.

And now for the low-down on the video in question. The video itself is 4 minutes and 47 seconds long and reportedly contains footage of what appears to be two people in a bed having sex. Thought you cannot see the pair, you later see a naked man walk in the room, which is allegedly Hart. In the video, the extortionist explains that they’re looking not just for money, but also to expose Hart for being a cheater. They also insinuate that Kevin’s call for other celebrities to donate to Hurricane Harvey relief was a media stunt meant to gain points with the public.

If what the video claims is true, it was shot “between the dates of August 17th, 2017-August 20th, 2017. The weekend of his pregnant wife’s birthday.” Yikes. Eniko is pregnant with the couple’s first child, and made waves herself when she posted a photo of the pair on their anniversary that read, “8 years together… 1 year married… Forever to go!” The caption may seem harmless, or even sweet, if not for the fact that Hart had not divorced his ex-wife until 2011. If we do the math, Eniko is suggesting her relationship with Hart has some overlap with Hart’s previous marriage. And that, as you can guess, caused quite the stir on social media. In case you were worried that Hart’s ex-wife Torrei Hart wasn’t going to chime in, don’t be. In fact, she hasn’t stayed silent in his extortion case either. Torrei sat down with Inside Edition and told them that “lies and infidelity” were what ruined their marriage. You know what they say, “Once a cheater…”

And Hart hasn’t exactly been shy about his past infidelities. In his comedy special Kevin Hart: Let Me Explain, the father of two jokes, “Lying ruined my marriage…That’s a lie, I cheated. The 38-year-old continues on to say, “Yes, people. I cheated. Am I ashamed of it? No, I’m not. Do I wish I could take it back? No, I don’t. Let me tell you why. You can’t evolve as a man if you never make a mistake. The only way that you can be perfect is to not f— up. I did it. I f—-d up. Don’t cheat.”  Ladies, would this make you feel better? Yeah, I don’t think so.

Even more foreboding was an interview that Hart gave in 2016 when he appeared on The Breakfast Club. In the interview, Hart discusses the riskiness of cheating when you are famous. “I wouldn’t be a good cheater right now because I don’t feel like I can trust you to cheat. So you wouldn’t want to cheat with me because I’d be questioning you like, ‘What you doing? You taking a picture?’…There is no sanity that comes with it, so why risk it?”  Why risk it, indeed.

The person who made the video goes on to claim “Kevin Hart was so drunk and drugged up, it was an effortless attempt to film and take pictures of him.”

Yes, this case is juicy and yes Hart is a victim of extortion if the facts and evidence end up supporting the allegations but, at this point, the case is simply sad. We have great empathy for Eniko, currently pregnant and dealing with all this stress (though as mentioned above if we look at the dates we’d have to say she knew Hart wasn’t squeaky clean) as well as for Montia Sabbag–neither of these women deserve this. We will be following closely as the story develops and as we find out more about who is behind the video.

AUDIO: Weinstein Charged with Rape
Previous Post
Here’s What You Need to Know About XXXTentacion’s Murder