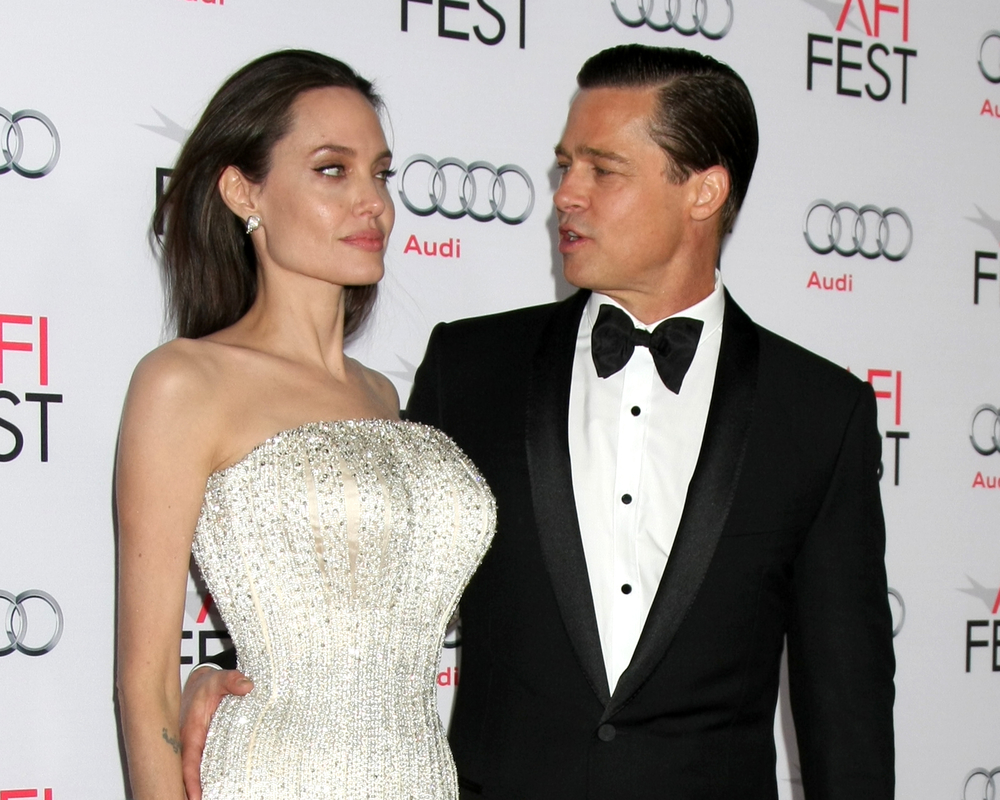 Brad Pitt and Angelina Jolie’s Hollywood love story is the stuff of legends. Pitt met Jolie in 2004 and, according to Jolie herself, “fell in love” while filming Mr. & Mrs. Smith. The media had a field day with this one because, as we all know, Pitt was still married to Jennifer Aniston. Marked by their ever-growing brood, for nearly a decade the couple would become one of Hollywood’s most recognizable.

It’s All About the Kids
Angelina had already adopted her son Maddox when she met Pitt and, in 2005, months into their relationship she adopted her daughter Zahara.  Pitt filed to legally adopt both of the children and petitioned to have their last name officially changed to Jolie-Pitt (we really respected this hyphenation choice). From there the family grew. In 2006, Angelina announced that she was pregnant with her first biological child with Pitt, Shiloh, who was born in June 2006. In March 2007, the couple adopted once again–adding their son Pax to the family. In August 2008, they welcomed their biological twins, Knox and Vivienne.  This brought the Jolie-Pitts up to 6 kids. Angelina said at the time, “It is chaos, but we are managing it and having a wonderful time.” And, it kind of always looked like they were.

The two didn’t officially announce an engagement until April 2012, and even that came after much speculation that the pair were separating, then marrying, then splitting, then staying together. They officially wed in August 2014. The couple, though a constant source of gossip and speculation, were known to have their children as their focus and, as such, generally flew under the radar. That was–at least–until September 2016.

Don’t Fly Private
On September 19th, 2016, Angelina filed for divorce citing irreconcilable differences. She also requested full physical custody of all six children and asked the judge to give Brad only visitation rights.

Reportedly Angelina’s decision to file resulted from an incident that allegedly happened on a private plane where the Los Angeles Department of Child and Family Services andFBI got involved. Very few details have been confirmed, but the incident reportedly involved Pitt and his eldest son Maddox. There were also whispers that Brad’s drinking–which he has allegedly since gotten help for at a rehabilitation center–had something to do with the incident. But, as any couple will tell you, a divorce rarely comes down to one incident.

Keep it out of Court
Early on the couple announced that they were going to hire private mediators to resolve all matters. This was a good decision as it would keep private information about the family and their finances out of the press. The US court system is public anyone who wants to see documents can do so, unless there is a protective order or they are sealed by the court. In most instances, having an open legal system is desirable and necessary, but in divorce and custody disputes, especially for the rich and famous, it can become very damaging. That’s exactly what is happening right now.

Jolie filed a document with the court and the rumors have not stopped flying. First, TMZclaimed that Jolie’s high-power celebrity divorce attorney, Laura Wasser, was quitting because Jolie was being so “hostile” in the divorce proceedings. Jolie’s rep quickly denied those rumors. Apparently, Wasser is still very much Jolie’s representative though other lawyers, from other law firms, appear to have joined the team.

Brad, a deadbeat dad?
Second, the couple is now starting to argue about money. In legal documents, Jolie claims that her ex “has paid no meaningful child support since separation.” Jolie is now asking the court for a child support order that include retroactive payments.

Accusing Brad of being a deadbeat dad? So much for keeping the kids out of it. The gloves are now off. A source close to Pitt said PItt has paid “easily millions” towards child support for their six children.” In fact, the source goes on to say that Pitt has paid “far more than any informal agreement would stipulate and far more than any judge would have ordered paid if there had been such an order.”

A rep for Jolie attempted to clarify the reasoning behind the court filing saying it was meant to “provide closure to the marriage in a way that clears a path toward the next stage of their lives and allows her and Brad to recommit as devoted co-parents to their children.”

The money talk has continued to flow and now Pitt’s people are claiming that he has paid $9 million in child support and that Jolie’s claims were retaliatory and “a thinly-veiled effort to manipulate media coverage.” And that’s when Brad spilled the tea about the other ways in which he supported Jolie and their children. He claims he paid $1.3 million in bills for Jolie and their children andloaned Jolie $8 million for her current residence.

Jolie’s camp fired back that Pitt treated the $8 million as a loan and that it is not equivalent to child support. Child support is not optional in California, where the matter is filed, and though Jolie has asked that Pitt pay only 50% of the children’s’ expenses, that has simply not been the case according to a representative for Jolie.

Now that the court is more involved, both Jolie and Pitt will have to turn over a great deal of documentation about who owes what to whom and how much. These are big numbers people, lots of kids and lots of publicity.  Things are only going to continue to get messier.

Back to Private Mediation?
We at PROOF preferred when this couple was committed to keeping the matter out of the public eye and in the hands of private mediators. Let’s not forget, at the heart of this are six children.  But, we do not know yet know what is true and what is not. Jolie must have had her reasons. She is, of course, a mother first.

To read more about Jolie-Pitt and other celebrity divorces, click here and here.