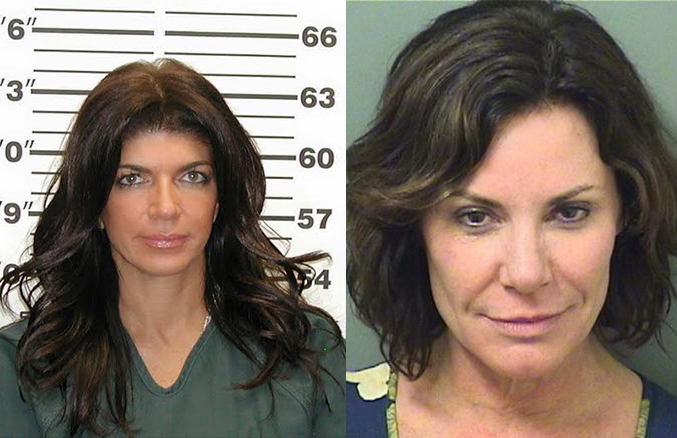 Most of us accept the fact that reality tv is far from reality but even though we know that, admittedly, sometimes reality TV has even the most discerning of us wondering whether or not these reality stars actually are the way they seem on television. That is especially true when they’re badly behaving. What’s real and what’s scripted on these shows? Table flipping? Screaming? Making bad drunk choices? For the 7 reality stars discussed below, there’s no question because they have the criminal records to prove that their bad behavior: no script in sight.

We’ve got ourselves a situation (sorry, sometimes we can’t help ourselves)! Well, at least this Jersey Shore star created a pretty bad situation. The 35-year-old and his brother Marc were convicted of tax evasion after they pleaded guilty to filing false tax returns and tax evasion back in January 2018. The Situation was attempting to squirrel away his money into secret accounts with the aid of his brother. In October 2018, Sorrentino was sentenced to 8 months in prison, two years of supervised release, 500 hours of community service, and was ordered to pay $123,913 in restitution (which he has paid) and a $10,000 fine. His brother did not fare as well–he was sentenced to 2 years in prison with supervised release for a year once that ends, an undetermined amount of restitution, and a $75,000 fine. Sibling jealousy might be at its highest for the Sorentino bros.

The former Dance Moms star Abby Lee Miller was charged in October 2015 with trying to conceal over $750,000 worth of income in secret accounts after she had filed for Chapter 11 bankruptcy. The dance coach ended up pleading guilty to charges of bankruptcy fraud in June 2016 and was ordered to serve one year in prison. She began serving her sentence in July 2017 but in March 2018 was released into a halfway house. Did she get special treatment because she’s a reality star? Not really. This type of reduction in sentence is very typical.

The reality television star was sent to jail in 2015 after pleading guilty to drug trafficking. He was ordered to serve an 8 year sentence and pay a restitution of $170,000. Reportedly he was part of a ring that transported drugs from New York City to Rochester County in New York. All in he was alleged to have trafficked more than $2.5 million worth of illegal substances in a 7 year span. In early 2018, his lawyers appealed the sentence arguing, among other things, that there was a change in sentencing guidelines and, as such, Harris’ sentence should be reconsidered. A federal appeals court wasn’t having any of that and denied the request to even review the matter.

Nida is the ex-husband of RHOA co-star Phaedra Parks. He was arrested for identity theft and bank fraud in January of 2014. Apparently, Nida created fake companies and set up fake bank accounts using stolen identities. He used those accounts to steal more than $2.3 million! Nida was facing a sentence of 30 years, but in exchange for his cooperation the sentencing recommendation was reduced to eight years and that was what was ordered.

Joe Giudice, Teresa Giudice’s husband was sentenced to 41 months in prison and Teresa was sentenced to 15 months after the flashy couple was convicted of tax fraud in March 2014 (click here to read more detailed Proof coverage on that). Their illegal behavior brought in extra cash to the tune of $5 million. The judge, recognizing that the Giudice family would be better off if at least one parent was home to care for their four daughters, ordered that the sentences could be served consecutively. Teresa was released right before Christmas 2015. Joe is still in prison and, in a rather shocking turn, a judge has ordered that he will be deported back to Italy once he has served his time.

Kim Richard was arrested back in April 2015 after behaving badly at the Beverly Hills Hotel allegedly due to the overconsumption of alcohol. The RHOBH star was drunk at the hotel and asked to leave, at which point she locked herself in the bathroom and had to be forcibly removed. At some point she also kicked a police officer. She was later arrested again for shoplifting at Target in August 2015. She served a combined sentence after pleading no contest (same as a guilty plea really) to resisting arrest and shoplifting–both misdemeanors. She was banned from Target, sentenced to three years’ probation, and ordered to serve 30 days of community labor and mandated to complete 52 weeks of Alcoholics Anonymous meetings. Adding insult to entitlement (oops, we mean injury) Richards almost found herself facing jail time in 2017 because she didn’t complete the court ordered community service within the designated time frame. Lucky for her she was granted extra time and completed the required hours.

This RHONY star was arrested after kicking an officer on Christmas Eve 2017. She was charged with resisting arrest, battery of an officer, and disorderly intoxication. The video of her arrest is all over the internet and it is very damaging. The Countess can even be heard threatening the cops,” I will kill you,” she repeats. Yes, we know, the holidays are hard. She subsequently released a statement saying, “I want to offer my sincere apologies to anyone I might have offended with my behavior. This was my first time in Palm Beach since my wedding and being there brought up long-buried emotions. I am committed to a transformative and hopeful 2018.” She rejected a plea deal in February 2018, but ultimately a deal was made that kept de Lesseps out of jail. She was sentenced to one-year probation and ordered to perform 50 hours of community service, attend two AA meetings per week, not possess or consume alcohol or illegal drugs and attend a Victim Impact Class organized by Mothers Against Drunk Driving (MADD), as well as write a letter of apology to one of the officers.

Kanye Settles With Lloyd’s of London for Cancelled Tour, So Much for their Countersuit
Previous Post
Jill on TV and Radio: Hear Her Sound Off on the Hottest Topics