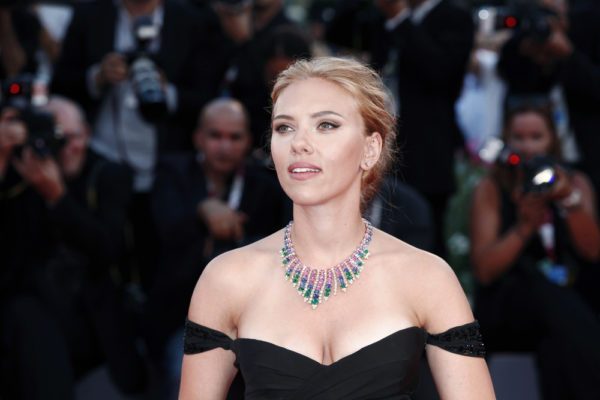 We are HUGE Scarlett Johansson fans here are PROOF so we are sad that is has been confirmed that her marriage is over. And sadder still that things look like they might get pretty messy.

Scarlett Johansson filed for divorce from her husband, Romain Dauriac, a French journalist- turned-popcorn seller (Just a few months ago he and Johansson opened Yummy Pop, a gourmet popcorn shop in Paris.) on March 7, 2017 after only two years of marriage. In January we had heard rumblings that the couple had broken up but all seemed quiet there for a while. Johansson, no dummy, thankfully did have a prenup with Dauriac so the majority of the financial issues are resolved. The biggest issue in the breakup is going to be over custody of their 2-year-old daughter, Rose Dorothy. Johansson has asked for primary physical custody. According to his lawyer, Dauriac is going to fight that.

Both Dauriac and Johansson are known to be private people. And, we remain impressed with ScarJo as one day after filing the divorce papers, she released a statement saying that in the future she will not be discussing her divorce.  “As a devoted mother and private person and with complete awareness that my daughter will one day be old enough to read the news about herself, I would only like to say that I will never, ever be commenting on the dissolution of my marriage,” she stated. “Out of respect for my desires as a parent and out of respect for all working moms, it is with kindness that I ask other parties involved and the media to do the same. Thank you.” Scarlett, we hear you and we will respect your privacy and only report on facts as we know them and are substantiated.

But Johansson isn’t the only one releasing statements, Dauriac released one of his own that same day. He is not pleased that Scarlett filed papers with the court (FYI PROOF readers–a couple can’t get a divorce in the US without ultimately filing legal papers with the court. Yes, custody and other matters can be worked out without court involvement but only a court can issue a dissolution of marriage.) In fact, Dauriac asked Johansson to withdraw them in order to protect their daughter. The Frenchman said in his statement: “It is indeed unfortunate, especially for our daughter, that Scarlett filed in Court and made our personal differences so public. I would implore her to withdraw her action promptly and go back, as uncomfortable as it might be, to the negotiating table. We are the parents of a lovely daughter whom we will continue to co-parent for many years and share her joys and sorrows as only a parent can.”

What is particularly worrisome in this situation and has us thinking of poor Kelly Rutherford is that Dauriac’s lawyer has said that his client plans to petition the court to allow him and his daughter to move to France. Apparently, Johansson and Dauriac were in the middle of

private negotiations when she filed papers but it’s obvious that those discussions were not going quite how Johansson hoped and she wanted official court involvement. Depending on how broken those negotiations had become, we agree with this decision by Johansson and her team. Too much at stake here to play nice for too long.

We really hope that Johansson and Dauriac can come to an amicable solution regarding custody of Rose and that things don’t go the way of Kelly Rutherford, as we mentioned above.  Most of us know how that hellish multi-year, international custody battle ended: Rutherford losing custody of her two children to her Monaco-based ex, Daniel Giersch as well as causing her to go bankrupt. If Johannson and Dauriac can keep the best interest of Rose in mind at all times as the case progresses, there is a lot to gain, as top divorce lawyer, Brandy Austin, makes clear: “Having represented numerous clients in divorce proceedings, I can attest to the emotional impact a custody dispute has on a child. Although there are multiple interests involved, the child’s best interest is of utmost importance. A parent who puts the child’s interest before their own can often avoid a contentious battle in court and win the favor of the judge or jury.”

We do appreciate this couple’s desire to keep things private, much like Brad and Angelina’s recent decision regarding their divorce (of course this was only after issues regarding custody and care of their children became VERY public) but we can’t say we think this is going to be an easy one.  This custody matter seems primed to become an all out custody battle. Hopefully, the result will be the one that is in the best interest of young Rose Dorothy. We’re rooting for you little one.