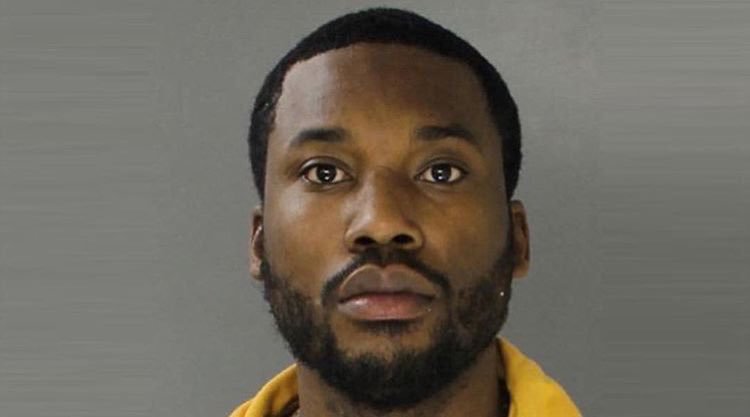 You might know Meek Mill as the rapper who dated Nicki Minaj or the one who had a longtime feud with Drake. But recently the rapper has been in the news championing prison reform after a lengthy legal battle, $30 million in legal fees, and serving jail time following petty parole violations and a variety of charges. Here’s the skinny:

In 2007, when rapper Meek Mill was 19 years old and then going by Robert Williams, he was convicted of seven gun and drug related charges in Pennsylvania. Judge Genece Brinkley sentenced him to 11-and-a-half to 23 months in prison to be followed by 7 years of probation. Though others called for a harsher sentence, Judge Brinkley wanted to give him a “chance.”
Six months later, the young rapper was out of jail and sent to house arrest (which, by the way is completely normal for the sentence he received-the early exit wasn’t due to any celebrity special treatment). While living under house arrest, he was to earn his GED and undergo drug treatment. In December 2009, Judge Brinkley terminated the house arrest but kept the rapper on probation. While on probation he tested positive for marijuana and unspecified drug use on more than one occasion. She did not, however, hold him in violation of his probation. That is until 2011, when Mill tested positive for opiate use. Though Mills touring kept him from appearing in court (that is celebrity special treatment), Brinkley ordered the rapper to take a drug test; Mill didn’t comply.

Two weeks later, Judge Brinkley’s forgiving nature changed. She suspended his permission to travel until after his court date. This meant Mill could not leave Philadelphia until his next court date two months later. The Judge also barred him from scheduling travel for another four months. When Mill left the area two months into that four month holding period, she found him in violation of probation. She also ordered him to sign up for an etiquette course “to address his inappropriate social media use and crude language in the courtroom.” (good luck, Genece).

In July 2014, Meek again landed himself a probation violation for leaving Philadelphia County. Brinkley sentenced him to three to six months in county jail and another five years of probation. He was ordered to undergo drug testing, enroll in alcohol counseling, anger management and parenting classes.

On December 10, 2015, Meek received his fourth probation violation. This time it was traveling outside of Philadelphia without permission, not reporting to his probation officer, and submitting water instead of urine for a drug test. Brinkley sentenced Mill to 6-12 months of house arrest and another 6 years of probation. He was also ordered to perform community service and was completely barred from traveling or working while serving his house arrest.

Then came Mill’s fifth probation violation for which Brinkley cited a failed drug test, a violation of his travel restrictions, and two misdemeanors–reckless driving in Manhattan and an altercation at the St. Louis airport.

Even though the charges in the New York case were set to be removed from his record and the St. Louis charge was dropped, Brinkley had had enough: She gave him a two to four year prison sentence against the recommendations of the prosecutor and probation officer.

Mills legal team filed a motion for Brinkley to remove herself from the case. In the motion, Mill’s legal team said that Brinkley “repeatedly offered inappropriate personal and professional advice to the defendant, who had become a successful professional entertainer during the pendency of this case. On some occasions, Judge Brinkley has done so off the record, or on the record while attempting inappropriately to keep that record secret from the defendant and his counsel.” They also said that she repeatedly attempted to get Mill to sign a record contract with her friend Charlie Mack. In another bizarre claim, Mills said that she invited him and his then-girlfriend Nicki Minaj to have a private conversation, during which time she asked him to cover a Boyz II Men song and give her a shout-out in it.

In another motion filed against Brinkley, Mill’s legal team says that Brinkley had advised Mill not to appeal his sentencing in 2016. They claim that, because Mill did appeal her decision, Brinkley’s subsequent actions were retaliation.

Now, while these claims suggest that Brinkley was deeply and personally invested in this case and attempting to use it for some kind of gain (even if that gain was just a Boyz II Men song…) it is common after a fifth probation violation for the court to give a harsh sentence. It is less common, though, for a judge to overrule recommendations of prosecutors and probation officers.

After Mill was sentenced to jail, hundreds of protesters showed up outside of the Philadelphia Criminal Justice Center demanding that his prison sentence be overturned. Celebrities also rallied behind the rapper. Rick Ross, Colin Kaepernick, and Jay-Z being the most notable–Jay-Z even wrote an opinion piece for the New York Times.

On April 24th, 2018, the Pennsylvania Supreme Court ordered that Mills be released on bail. The decision came after the District Attorney’s office recommended that Meek’s conviction on gun and drug charges be overturned. They were concerned with the credibility of the police officer who was a key witness in the case. Reportedly, the Philadelphia police officer, who served as the sole police witness to testify against the rapper, had stolen money in a drug bust and failed an FBI polygraph test according to a 2016 Internal Affairs report. Not exactly the model witness.

June 2018: Judge Brinkley to Remain on the Case

Mills’s lawyers sought to remove Brinkley from the matter. The Pennsylvania Supreme Court split right down the middle with a 3-3 vote on the matter. And, as such, she remains on the case and will preside over an upcoming evidentiary hearing in connection with that 2007 conviction which Mills is appealing. Brinkley has maintained that all of her rulings were impartial and without prejudice.

With reality stars like Kim Kardashian visiting the White House to talk about prison reform and working to help win release for the wrongly incarcerated (click here for more on that) we at PROOF think it’s quite a good use of celebrity power and influence to take a stance and try to effect change. Likely Mills, who has experienced our system first hand, will be become quite a voice in the fight to reform parts of our criminal justice system.