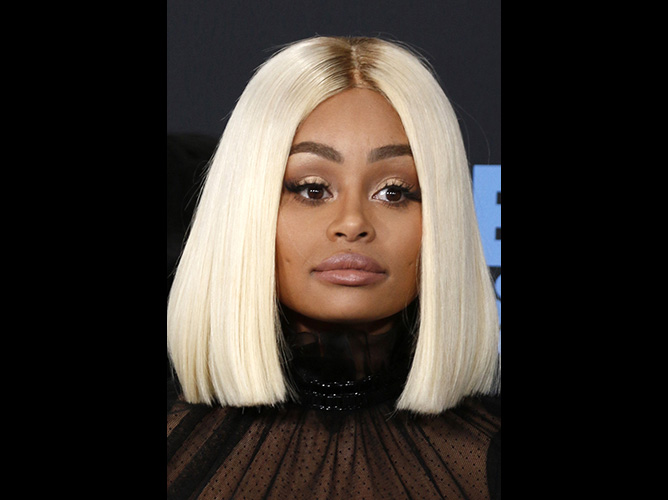 Blac Chyna Takes on All the Kardashians

Update: An LA judge comes down on the Kardashian’s side and dismisses Kris and Kim from Blac Chyna’s lawsuit for tortious interference of a contract. Bottom line: the judge didn’t believe Kim and Kris did anything to cause E! to drop Blac Chyna’s reality show. The claims against Rob still stand. And, certainly if Blac Chyna unearths new evidence against she can file another suit and name whoever she wants, including Kim and Kris.

Blac Chyna has decided that simply suing Rob Kardashian isn’t going to cut it in terms of righting what she feels are legal wrongs committed against her. On Tuesday, October 17th, 2017, Chyna filed a lawsuit against the entire Kardashian family. The main claim? The famous fam She is responsible for the cancellation of her television show Rob & Chyna.

This move comes after Rob Kardashian filed his own suit accusing Chyna of using him and his family name as a means for financial gain. Got a point here, Rob. Chyna, nee Angela Renee, tried to trademark the name Angela Renee Kardashian before she married Rob! (The request was denied, fyi.) In response to Chyna’s claims, the Kardashians claim that the cancellation of the show wasn’t up to the family, but to E! execs as well.

We would also guess that the frequently rocky relationship spelled doom for the show– a show about a couple generally requires a couple! Chyna and Kardashian began dating in 2016 and tales of their troubles have consistently been the subject of tabloid and media scrutiny. The “difficult” nature of their relationship rocketed into the spotlight after Rob posted naked pictures of Chyna on Instagram and Twitter, accused her of drug use, infidelity, and neglecting their daughter, Dream.

But alas, nothing is ever simple in Hollywood–or the law–and Rob filed the lawsuit against Chyna referenced above, and the vicious circle of who’s suing whom continued to go ‘round.

In this most recent suit Chyna claims that Rob & Chyna had “stellar” ratings and that it was going to be picked up for another season, even though she and Rob decided to split up. Chyna isn’t wrong about the initial ratings. The series had drawn 1.4 million viewers for the premiere, but soon their ugly split was all over the media, and the ratings began to tank. This isn’t how Chyna sees it, evidently.

According to courts docs and Lisa Bloom, Chyna’s lawyer, “Rob Kardashian is an abuser intent on destroying Angela White [Chyna’s birth name], the mother of his baby, who left him in 2016. In revenge, the Kardashian-Jenner family became media predators, slut-shaming her on social media and killing her hit television show, which had already begun filming a second season.”

The complaint filed in this matter is really worth the read. But, to save you some time, here are some of our favorite allegations on the first page alone, “…little Dream, who Ms. White could not possibly love more and who Ms. White, despite her many powers, did not conceive by herself.” Or this dig at Rob for including the destruction of a gingerbread house in his lawsuit “…really: a gingerbread house…” she writes in italics for emphasis, and later “[The Kardashians] will even fund a lawsuit about crumbled cookies to get revenge on you for leaving a Kardashian.”

In Chyna’s eyes, the end of her reality television show was canceled because of Rob’s family. In her complaint, she cites an episode of KUWTK in which the family raises their concerns about Rob and Chyna’s unhealthy relationship. She believes that discussing this on television may have made it seem like cancelling the show was what was best, but instead, “the famous family was flexing their muscles so as to destroy Ms. White’s career so that she was no longer able to compete against the Kardashian-Jenner women as an entrepreneur and social media influencer.”

She is also accusing the Kardashians of leaking false reports about her to the media. Remember the story about Chyna leaving Dream at home to go to a party? Or how about how she demanded $50,000 in child support? She thinks that was the Kardashians. She’s suing for defamation and interference with contractual relations.

Here’s how we see it. Not to knock Chyna’s success (she has certainly made a name for herself) but she also is no competition for the powerhouse family that is the Kardashians. The word “family” hardly cuts it here: The Kardashians are an empire, and Chyna assuming that they would sabotage her show (and by proxy sabotage one of their own) seems like a bit of a reach. Kris Jenner is collecting a check, after all, so any cancellation would only serve to hurt the momager.

Chyna is also reviving her claims of domestic violence, suing Rob for harassment, assault, and battery. She’s also alleging that he abused and harassed her over text messaging, even threatening to kill himself. Other complaints include intrusion into private affairs, false light, disclosure of private facts, and interference with economic relations. Needless to say, it’s a pretty hefty lawsuit. It is filled with proof of Rob’s continued cyber-harassment and accounts of verbal and physical abuse. We want to make it clear that it is important for Chyna to speak on this abuse and get justice, but we’re just not sure if the suit against the entire Kardashian-Jenner clan will stick.

We’ll be KUWTL (keeping up with these lawsuits) as we’re sure the legal war between Chyna and at least one Kardashian will be waging on for quite some time.